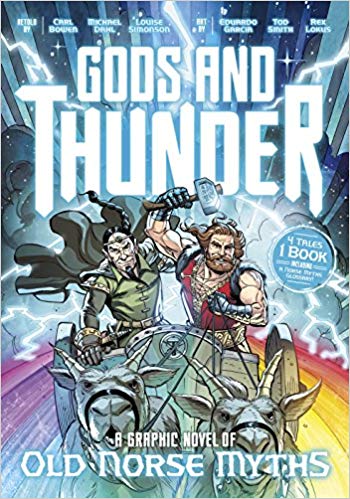 Gods and Thunder: A Graphic Novel of Old Norse Myths

Faithfully retold and brilliantly illustrated, this graphic novel brings Norse myths to life. Beginning with an explanation of Yggdrasil, the World Tree, and traveling all the way to Ragnarök, the Norse version of the apocalypse, Bowen, Dahl, and Simonson explore the complexities of the lives of the old Viking gods, with particular emphasis on Thor and Loki. The ultimate “frenemies,” Thor and his adopted brother Loki have a fraught relationship that many readers will recognize from the big screen. From committing fairly innocuous slights (such as convincing Thor to wear a bride’s dress as part of a scheme to steal his hammer, Mjölnir, back from giants) to more terrible wrongs (for instance, the death of Odin’s favorite son Baldur), Loki is the bad penny of the gods—he somehow always turns up. Readers will thrill at the escalation of his evil deeds and the resulting heroics of Thor, culminating in the final battle, Ragnarök, the Doom of the Gods. Surprisingly complete, the work is enhanced by a glossary that includes phonetic pronunciations of names and additional information about characters, places, and items such as Gungnir, Odin’s spear. Clearly demarcated panels and bright, eye-catching illustrations have a classic comic book feel. Though the vocabulary is challenging, the book is accessible, and even younger children will enjoy the action-packed stories. With the popularity of Marvel’s “Thor” franchise and Rick Riordan’s “Magnus Chase and the Gods of Asgard” series, this volume is guaranteed to see bountiful circulation.