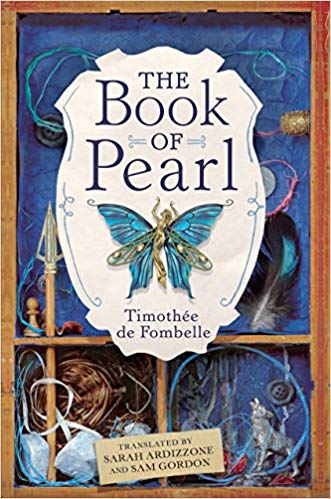 The Book of Pearl

In this stirring French fantasy, a Pearl is far more than a precious gem. A Pearl is a member of the talented Jewish family who has a gift for producing magnificent artisanal marshmallows in their charming patisserie. During a rainstorm, Monsieur Jacques Pearl rescues and adopts a boy he spies standing frightened and alone in the downpour. It quickly becomes clear that the boy is not of this world; he is from a world of fairy tales, complete with enchanting fay, usurped kings, and dastardly assassins who are on the hunt for the disappeared prince. Chapters set in this fantasy world are interspersed among those that take place in France before, during, and after World War II. Although de Fombelle excels in his romantic and ornate descriptions of the different worlds and characters, readers might find it difficult to follow the disparate narratives. This is not helped by the narrator, a seemingly random character who literally stumbles into the story. Frustratingly, his significance and contribution to the main story remains purposefully muddled for much of the book. However, at its heart, this is a fascinating and epic tale of forbidden love that spans years and universes. The events of World War II make a surprisingly accurate parallel for lost and broken children looking for remnants of their former lives, while elements of the impossible love story resound beautifully throughout.