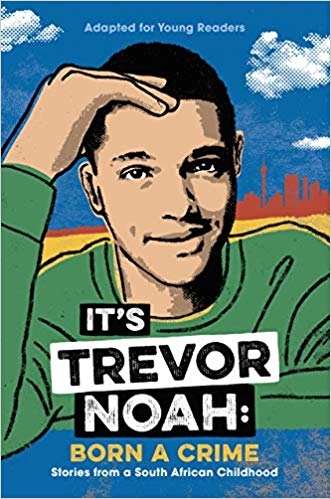 Comedian Trevor Noah is the son of a Black South African mother and a Swiss-German father. He considers himself born a crime as under apartheid law in South Africa, interracial relationships and marriages were seen as illegal until the law’s decriminalization in 1985, a year after his birth. Noah navigates through a childhood filled with poverty, discrimination, and uncertainty as a biracial person who does not know where he fits in under a racially stratified government. His religious mother’s unwavering faith serves as the saving grace and guiding light in his life. She sacrifices to ensure that he receives the best education as a means out of wayward behavior, hustling, and a life of crime. Their mother-son relationship is severely tested with the addition of her new husband Abel, whose personal demons reveal themselves and lead to an unexpected turn of events. The young readers’ adaptation utilizes South Africa’s colonial and apartheid histories as background context, offering keen insight into the diversity of South African culture, such as its many languages. Readers will appreciate Noah’s comedic wit and timing during the good, bad and ugly times of his upbringing. On the other hand, readers will cringe at some of the more painful situations, such as the downplaying of domestic violence.